Having more time on the trains between cities, we’ve blogged about our time in Philadelphia and New York. We are playing catch up on the rest of the cities we visited.

To start off the tour de east coast we landed at Reagan National. Nice, easy spot to fly into. Our good friends Alex and Dustin hosted us for our time there and we were lucky to have Dustin have a day off to spend time with us.

The first thing Alex and Dustin asked was “Do you like burgers?” to which we answered (and will always answer) “YES!” They took us to Good Stuff Eatery in Arlington. We each got a burger and split fries. Good burgers for a medium price. Our favorite was the sauces that you can get to dip the fries in. After burgers we went back to their apartment and were able to taste some Oregon vodka, gin and whisky that Dustin’s family makes and sells. Great stuff!

Saturday was tour DC day with Alex and Dustin. Anytime you try to fit this in in one day you won’t get to see it all, but we were able to get the highlights and must do/see. Founding Farmers for brunch in the GW Univ. area was a great way to start our day out…slow service but great food.

National Mall sights:
– White House – wouldn’t truly be complete without active protests happening. Israel and Gaza supporters were both passionate about communicating to the President. Or at least the security guards and tourists. There was even a young girl in her twenties standing along the fence reading a book out loud about Israel.
– Washington Monument – tall and visible from most other places in DC. There is a patch of grass between the White House and Washington Monument that could use some love and creativity for land use.
– Lincoln Memorial and the Reflecting Pool – Reflecting pool sits between the Washington and Lincoln and is lovely in pictures unless you are walking right by it. Lincoln sits large and proud in his seat. The beard plays.
– Korean Memorial – I love to look at each soldier, as if they are part of a movie and you’re seeing them move right in front of you. Strong statement and both of us have seen this in rain/fog before, which is the best and most eery way to see it.

– MLK Jr. Memorial – New to both Ben and I. We thought this was a great setup for him. His figure chiseled out of a large slab, with a quote on the side “Out of a mountain of despair, a stone of hope”. The rest of the area detailed the historic and profound statements he made including my favorite: “Darkness cannot drive out darkness, only light can do that. Hate cannot drive out hate, only love can do that.” 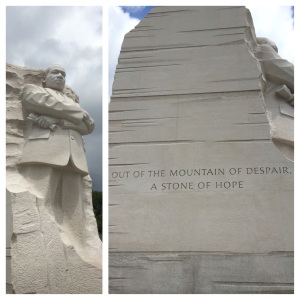 – FDR Memorial – New to Ben. I remember taking pictures with my friends by every fountain/water exhibit in this memorial on my 8th grade trip. Very serene feel and welcomed shade in this area. Best quote: “I have seen war. I have seen war on land and seas. I have seen blood running from the wounded. I have seen the dead in the mud. I have seen cities destroyed…I have seen children starving. I have seen the agony of mothers and wives. I hate war.” – Franklin Delano Roosevelt
– Jefferson Memorial – Full figure memorial with a “power stance” and full robe/jacket. Did they call them robes back then or am I just thinking of Harry Potter? Forgive my ignorance. Although I am now having a good picture of our early presidents partaking in the Harry Potter saga. Let’s see if Ben edits this out! Jefferson quotes chosen were wordy but in his time were the right things to help shape our nation. Bummed to not have time to show Ben Monticello, but alas, we move on.
– Natural History Museum – Way too crowded in here to take full advantage but very cool exhibits on genetics, full skeleton exhibits of hundreds of mammals, and of course the Hope Diamond.

That evening we were able to cross another ballpark off the list by attending the Washington Nationals vs. Philadelphia Phillies game. The stadium is great and not too far of a train ride located at the Washington Navy Yard. We were able to get some Tacos and put away a few beers at Agua 301 before heading into the game. Beautiful night and cool stadium. They clearly market to the younger crowd by offering a $5 beer before the start of the game. Nationals shut out the Phillies 11-0.

Best photo from this city: Ben Lucas, Commander in Chief 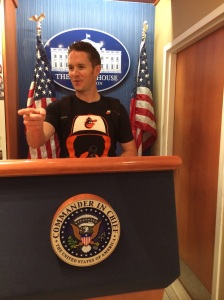 BALTIMORE
Next day we were off the Baltimore on the train (thanks Alex for taking us all the way there). Arrived at Baltimore Penn Station and then took the light rail to downtown. Our hotel room wasn’t ready so we checked our bags and walked to Camden Yards. What a great place. Picturesque setup with so many things to see and take your attention away from the game. Our seats were in right field foul ball territory but we were in the covered area.

We were able to have Casey and Wes (friends that we met in Fresno and have recently moved to the east coast off of Chesapeake Bay) drive up and meet us at the game. It was both Wes and I’s first Orioles versus Seattle Mariners game. It was an exciting game to start with a solo home run in the 1st inning but pretty slow after that. Even better to allow us to catch up with Casey and Wes, people watch and take in the atmosphere. Orioles won 1-0.

The “Electric Slugger” — You play it like a violin and it sounds like an electric guitar and is made out of a Louisville Slugger!

Post game we went to a local brewery and had some good beers! Also got to witness BronyCon 2014 in person. If you don’t know what that is, google it. It’s as weird as it sounds. After dinner Casey and Wes went home (thanks again for coming to see us!!), Ben and I walked to the Inner Harbor. Loved being able to see this. It’s post card beautiful and has so much character. Definitely has some touristy spots there but a different vibe there then where our hotel was. We got back to the hotel just in time before a torrential downpour. Great views of the storm from our room and a good time to make sure we didn’t miss our Sunday night TV show ritual (thanks HBO GO and surprisingly strong WiFi).